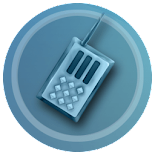 TeamTalk 5 is a freeware conferencing system that allows multiple users to participate in audio and video conversations. Also, it enables a group of people to collaborate and share information. During a conference, people can talk using their microphones, see other people using their webcams, share files, show desktop applications, play music, etc.

Unlike other popular conferencing applications TeamTalk comes with its own standalone server. This means you do not depend on a third party to host your conferences. In other words, you’re in complete control of your community and can choose who can participate.

The install file includes both client and server applications. Special client applications included accessibility features for the visually impaired. This software has been developed since 2002.

To use the TeamTalk conferencing system users must either set up their own TeamTalk server or connect to one of the servers which are publicly available. Once connected users are presented with a set of channels (sometimes referred to as rooms) which a user can enter and from there interact with the other users who are in the same channel.

TeamTalk supports multiple video sessions so it’s possible to see videos of every user in a channel. To see the users with video simply click the Video tab where all the active video sessions are lined up in a grid. Users who are transmitting video have a blue frame surrounding their user icon. By clicking the detach button in the top right corner it’s possible to see the selected user in a separate window.

The user can share any application running on her computer’s desktop with other users. This can be used for doing online presentations. To see the shared application in a separate window simply press the detach button in the top right corner.

By clicking the Files tab users can see which files can be downloaded in the channel they’re participating in. Each file is listed with a name, its size, and who uploaded the file.

Server Administration
The TeamTalk client application contains a list of publicly available TeamTalk servers which you can connect to and use freely. Some might, however, prefer to run their own server and for this TeamTalk comes with its own standalone server available for Windows, Mac OS X, and Linux. Running your own server allows you to configure exactly how you want your server to look and who should have access to it. The maximum number of users who can log on to a server is 1000.
What’s New in TeamTalk 5.9.0 Beta:

The TeamTalk Conferencing System consists of both a client and server application. Most users will only need to install the client application unless they also intend to run their own TeamTalk 5 server.