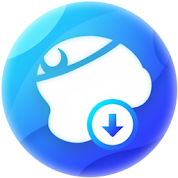 DVDFab Downloader is handy music, video downloader and conversion software. It allows music and video fans to download tons of online music from popular 200+ audio and video sites. Also, this app can convert online videos to MP3 tracks saved on computer HDDs, with just one click or two.

This means, that after transferring the converted MP3 audio files to your device, be it a smartphone, classic iPod music player, or even a smartwatch, you can take your favourite music everywhere. I no longer need to stream.

You will be able to download or convert online videos to MP3 files (of 320/ 256/ 192/ 128/ 96 kbps) that are compatible with extremely portable devices, such as an iPod Shuffle, an iPod Nano, even an Apple Watch, or an Android Watch.

So you can enjoy your favourite music, songs, concerts and albums anytime while you are doing the laundry, jogging, cycling, or even swimming. What’s more, this DVDFab utility is totally free for you to download single audio/videos one by one.

DVDFab Downloader Features:
Download and Convert an Entire Playlist at One Go

To one or just a couple of audios/videos, to download and convert won’t cost you too much time. However, if it’s an entire playlist which contains dozens of songs, downloading them one by one won’t be a pleasant experience at all. But don’t worry! If it’s a playlist, the Pro version of this music downloader software will give you the extra option to download and convert all the audios/videos under that playlist in one go. In this way, you can get all the songs in a playlist with no sweat.

Download the Metadata and Apply to the Output MP3s

The trump card of this music downloader and converter software allows you to subscribe to your favourite YouTube Channels, by doing that way, when next time you launch it, it will automatically check if there is newly updated music on the playlists Channels you’ve saved. Once new music uploads are found, it will then download and convert them to MP3s for you, also automatically.

The download of one video may cost you only a couple of minutes. But imagine an entire playlist that contains dozens of songs/videos, or if you have several playlists to be downloaded, that would require quite a while. This is when and where the Turbo-Speed Download feature can help a lot. Once the turbo-Speed is turned on, the download and conversion process can be 10X faster. This means, to download and convert an entire playlist won’t keep you waiting too long.

Multi-Task to Download 5 Audios or Videos Simultaneously
The free version of this music software can process one download task at a time. This means, that even if you add multiple download tasks into the queue, only one task can be processed at a time. Others will wait in the queue. The Multi-Task Download feature can process several download tasks simultaneously, with an upper limit of 5 at most. It is available only for the Pro version.
Products Included:
Changes in StreamFab 5.0.3.2 (2022-04-29):