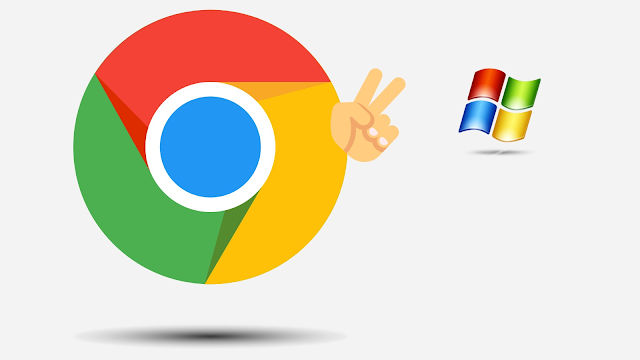 As a result, Chrome support for Windows 7 and 8.1 will stop in early 2023.
Google Chrome 108 now displays notices regarding the end of support: "You must have Windows 10 or later to receive future Google Chrome upgrades. This PC runs Windows 7."

Microsoft will soon discontinue the Extended Security Updates program for Windows 7, thereby killing the popular operating system. The business also does not intend to provide paid security updates for Windows 8.1, implying that both versions are doomed. Those who are still on Windows 7 or the admittedly worse Windows 8.1 are receiving more reminders with updates to Windows 10 or Windows 11.
Google Chrome 108, which was just launched, now displays warnings regarding the imminent end of support for Windows 7 and 8.1:
You must have Windows 10 or later to receive future Google Chrome upgrades. Windows 7 is installed on this PC.

Google and Microsoft both intend to cease upgrading their browsers on the aforementioned operating systems, so here's another reason to upgrade to Windows 10 or 11, assuming your hardware allows it (not to mention apps that will soon stop working on Windows 7). Furthermore, you may still activate Windows 11 (and 10) with Windows 7 activation keys.
To put it gently, utilizing an unsupported operating system and browser to access the current internet is dangerous (like downloading music with Limewire). Despite this, some people will stick with Windows 7 as they did with Windows XP. Customers in this situation can disable the new Chrome alerts using a Windows Registry entry that disables the update prompts.

Although it is not advised to use an unsupported browser, it is possible to remove this notification by editing the Registry:
Press Win + R and type regedit.
Unlike Google and other Chromium-based browser developers, who have already decided to discontinue Windows 7 support early next year, Mozilla has yet to determine when to end support for Firefox for Windows 7. Developers are considering providing more than six months of ESR support to Firefox users on the soon-to-be-dead Windows editions.